Empowering Your Community Through Information and Building Trust

To hear more details from Kathyrn D’Angelo herself about what worked well for Richmond School District 38, check out Episode 2 of Bang the Table’s podcast.

Neighbourhood decline had led to underutilized schools and the Richmond School District 38 had to look at the possibility of school closures and engage their community on this difficult issue.

Richmond School District 38 decided to include online engagement as a part of their comprehensive community engagement plan and LetstalkSD38.ca was created to inform citizens about the issues and to empower them through their participation in regular feedback.

The community feedback ultimately influenced the final decision, no schools closed and the School District regarded the project as a success.

EngagementHQ, the online community engagement tool adopted by the school district, addressed many barriers to participation such as busy schedules, multiple language requirements, low levels of trust in government and concerns over the democratic process.

Let’s Talk SD 38 created a 24/7 presence where the community could go often to be well informed and stay up to date with results of participation.

The community was kept well informed and the site offered additional languages to include as many community members as possible. This was a key consideration when providing online information.

“We were particularly impressed by the meticulous commitment to provide regular feedback about public input and closing the loop at each stage of the project in a “what we heard” newsfeed.” said Matthew Crozier, CEO of Bang the Table.

The trust built through providing comprehensive information and regular feedback about “what we heard”, resulted in significant “Informed”, “Engaged” and “Aware” numbers for the engagement site.

There were notable spikes in activity after in-person events. This showed how effectively the team had integrated both the in-person and online techniques.

“We found the process of using online engagement and in particular the EngagementHQ site to be far more successful than we had anticipated. The community responded very well to the online surveys and we found the ability to have metrics at our fingertips very useful for reporting to the Board and the community” said Kathyrn D’Angelo, Assistant Superintendent, School District No. 38 (Richmond).

The willingness of the school district to truly engage, to update and inform the community often and listen to the community was observed by the BC Ministry of Education and was considered a great success.

The numbers don’t lie: During the summer of 2015, there were 20,254 Aware and Informed Citizens. Of those, 10,769 clicked to view or downloaded available information on the site.

During the potential school closure engagement process, 2,421 people opened the school closure report; 2,239 opened the Long Range Facility Plan Board Report and 1,369 the Woodward Backgrounder. 925 people read the Superintendent’s report on schools; 450 the update on school closures and 360 the open house dates.

Since the creation of the site, a total of 8,614 people have downloaded a document from the site. 3,286 visitors went to a project newsfeed–indicating that the site is a significant news source for students and families.

Parents were shown to be the most responsive participants in the surveys on the site with 80.5% of responses coming from this group.  Some snapshots of the site’s reports are shown below. 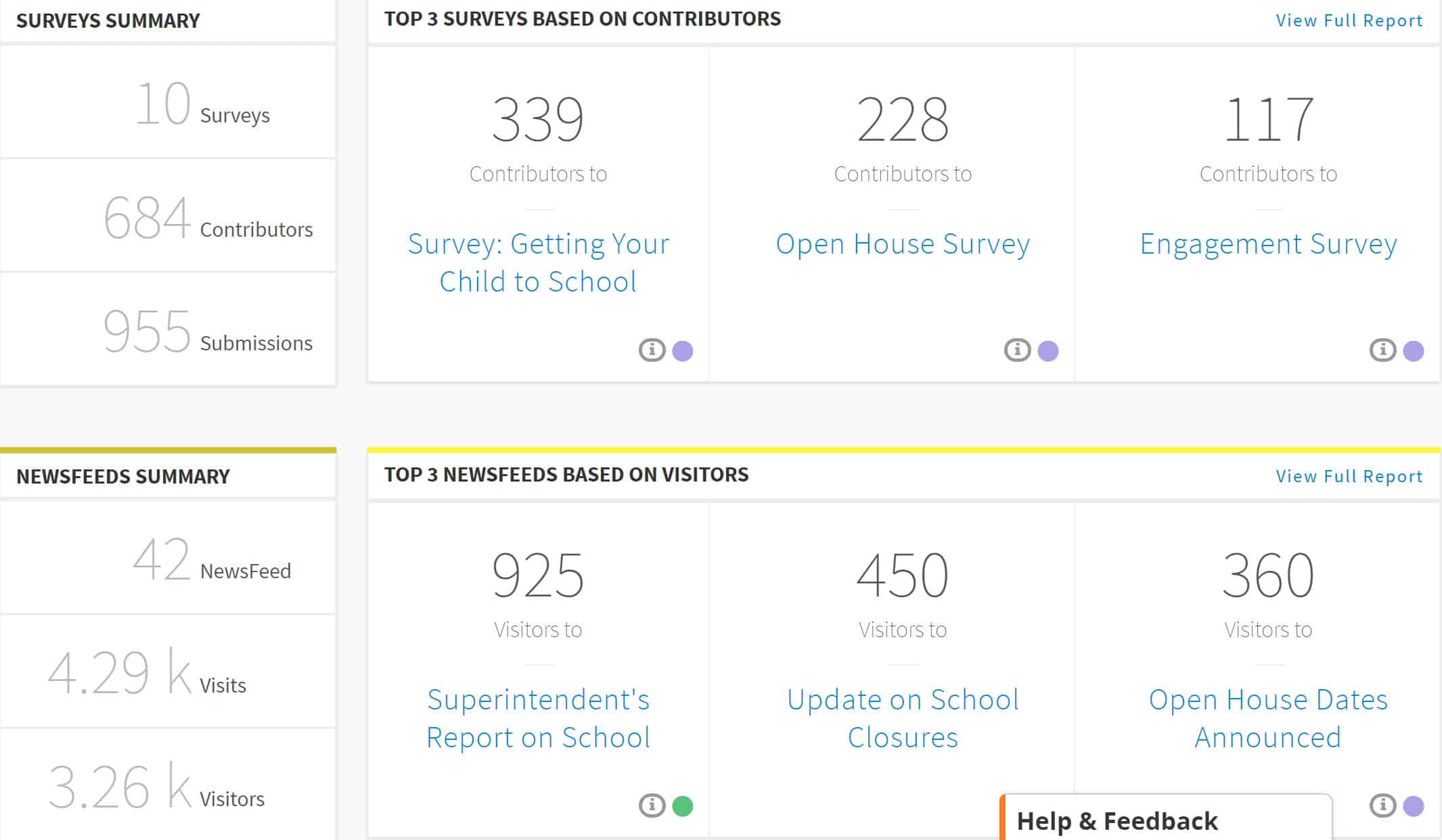