A Roadmap to Local Commercial Cannabis in Monterey

Caity Belta takes a deep dive into how Monterey, California created a thorough roadmap designed to guide community and Council, from start to finish, as they sought to implement local commercial cannabis. Monterey local leaders used their engagement site Have Your Say Monterey as a centralized resource and platform for data collection and analysis throughout the process.

Monterey, California illustrates a mindful team approach for their Roadmap to Commercial Cannabis on their community engagement platform. Monterey’s Roadmap success is a direct result of the team’s initial planning which began with Step 1: Create A Starting Point. By continuing to engage the public throughout all phases of the roadmap, they have stayed committed to transparency throughout the journey to implementing local commercial cannabis.

Their ethos of open communication and shared goals, championed by City Manager Hans Uslar, resulted in a thoughtful, inclusive, and continuous engagement program for Monterey community members. By including the Lifecycle feature on their commercial cannabis page, residents are able to see exactly where Monterey is in the process at any given moment. In addition to the at-a-glance timeline, Monterrey has created this graphic to help the public understand how the city will move to different phases of the Roadmap. 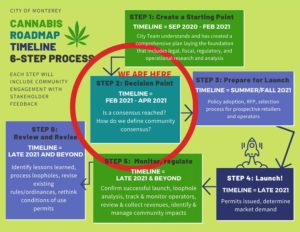 Assistant City Manager Nat Rojanasathira and Monterrey staff Laurie Huelga and Eric Palmer handled much of the initial setup, including project build, sourcing imagery, and graphics, choosing their engagement tools, uploading the Roadmap Timeline, and displaying key players using in the Who’s Listening section. They continue to maintain the local commercial cannabis page as the plan comes to fruition, creating a living record of where they’ve been and a preview of where they are headed.

Monterey was able to reach more people than ever before through online community engagement, leading to a robust local commercial cannabis roadmap that reflected the wishes of the community.

20% of the 1398 visitors to the cannabis project page participated in the conversation using EngagementHQ tools. Of those 1398 visitors, 50% of them explored other projects on Have Your Say Monterey. An overwhelming majority of that traffic came from direct links, suggesting that community marketing efforts were effective!

By using the Newsfeed, Monterrey can easily post new information as it becomes available. The community can view recordings of virtual town halls, have access to various analyses performed by city staff, view council meetings, get updates on elements of the Roadmap, and check out survey results. This helps Monterey continually close the loop as they move through their project.

By using the Questions tool, Monterrey has created a place where the public can ask a question at any time, even outside of established town hall meetings. By creating one place for people to ask questions, Monterrey has the benefit of posting the answers for others to see, if they wish to do so. Questions and answers are managed by admins of the engagement site, which cuts down on email back-and-forth. Utilizing Q&A is also promoting open lines of communication for the local commercial cannabis project, which helps with creating community connections and building community trust in the long run.

Monterrey also uses the Guestbook tool, renamed “Open Comments,” to encourage residents to share their thoughts and comments. Many times, community members can’t make town hall meetings. Using the Guestbook allows people to share feedback at their convenience. This simple, dedicated space upholds Monterey’s promise that community input will be continuous and prioritized as part of the process.

They were able to maximize public involvement in the local commercial cannabis project by keeping focused and data-driven. A survey was also conducted, both online using the Survey tool and using postcards. The large amount of quantitative data received online was compiled into this report using the reporting function built into their engagement site. This data can be analyzed using basic demographics that were collected as a requirement of participating on Have Your Say Monterrey, which can be used to analyze data from additional online engagements.

5. Getting it Right the First Time

All in all, Monterey’s engagement site has certainly contributed to their success so far – but it is simply one piece of the puzzle. By committing to “Getting it Right the First Time”, Monterrey made sure they were bringing all stakeholders on the journey; both internal and external. Their presentation to Council shows the amount of consideration and commitment that went into defining and planning for success.

Perhaps the most important and oft-overlooked aspect of Monterrey’s roadmap is Step 6: Review and Revise. With the last step being a holistic look at the road behind, Monterrey is setting itself up to create a proven, tested, formulaic approach to achieving success in any future undertaking. By applying their own methodology, they know internal stakeholders will be informed, external stakeholders will be clear on their role in participatory decision making, and, therefore, community trust will be built organically.

As cannabis legalization becomes more commonplace in the United States and elsewhere, local commercial cannabis policy will continue to grow in importance. Monterey’s commercial cannabis roadmap can serve as a blueprint for other communities looking to make similar, major changes in their communities. To take a closer look at Monterey’s success in creating a cannabis roadmap for its community, watch a webinar with Monterey local officials. 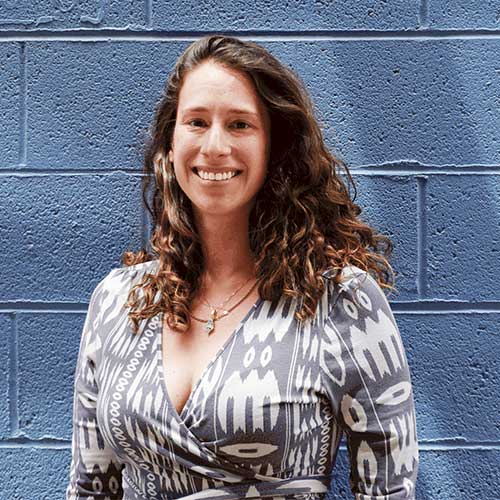