Around the world, governments large and small are exploring Participatory Budgeting. This is a process of democratic deliberation and decision-making, and a type of participatory democracy, in which ordinary people decide how to allocate part of a municipal or public budget. Participatory Budgeting allows citizens to identify, discuss, and prioritise public spending projects and gives them the power to make real decisions about how money is spent.

Until recently, North Americans have lagged behind their European and South American counterparts at apathetically low rates. By the end of 2012, North America was estimated as having completed barely a handful of Participatory Budgeting projects while the rest of the world had completed thousands – (see graphic, below).  While it was estimated that the current world total of projects completed is somewhere around 1500, Canadians and Americans had probably delivered around ten – and that’s being generous. 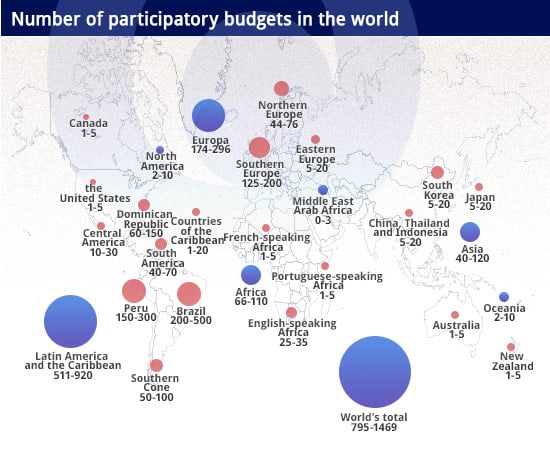 As the self-proclaimed purveyors and protectors of democracy, surely North Americans would have found these statistics startling. Europe had completed as many as 200, and Africa as many as 110. Even Asia had their share of Participatory Budgeting projects estimated to be as high as 120 – and that included numbers from China! The only region behind North America was the Middle East – a region plagued by social, political and religious unrest.

Now, I have no idea why there was such a disparity between North America and the rest of the world. As a Canadian, I always thought we were fairly progressive when it comes to implementing direct democracy. Digging deeper, I found another infographic, exploring how various world governments use technology in the context of public participation and citizen engagement.  Where North America was concerned, it was revealed that North American government have “…  well-developed infrastructures, and are ahead of other countries in terms of Service Maturity. However, they lag behind in the availability of online services and citizen participation and engagement. [North America’s] focus on cost cutting is perceived by their citizens as being government centered instead of citizen-centered.”

Moving forward, I believe a number of municipalities in Canada and the United States are catching on and embracing Participatory Budgeting tools, and trust in the process is building. In fact, some research points to as many as 75 Participatory Budgeting projects planned for 2016. That’s an encouraging leap forward! I personally like these sorts of interactive platforms because they enable the layperson who is not intimately tied to the inner workings of a budget to immediately visualize the impacts of an apparently casual decision. Using a variety of buttons on a dashboard, anyone can immediately see how a change in spending on one line item will potentially impact several other municipal service areas. As an example, take a look at the City of Mississauga’s Budget Allocator Project. 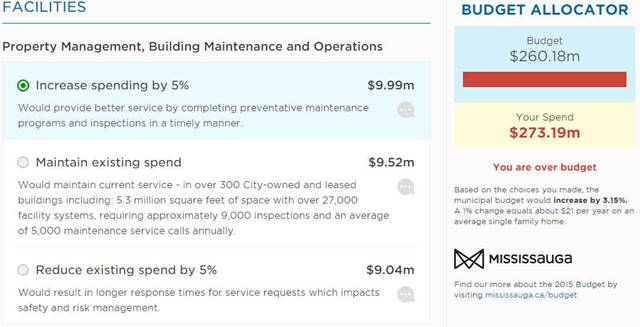 Note how a casual visitor can immediately interact with the budget? The default shows that the city has a budget surplus, but any changes in spending on transit, parks and recreation, roads, and traffic maintenance lands you potentially in the red – begging taxpayers to cough up as much as an additional $66.15 annually.

That’s what Participatory Budgeting does for governments: it asks citizens to walk in the shoes of their government. After all, it’s easy to ask for money, but as long as one is dealing with the status quo, any increase in one area means a service decrease to another. But it’s not just for city councils, either. Take for example the Funbobulator, which was a tool developed to help parents determine how to allocate funds for new playground equipment. Here, participants could quickly see what would happen to the budget for a playground if too many slides or monkey bars are optioned, and so on. (Interestingly, this exercise also marries elements of participatory design – but adds in the costs of the playground options.)

It’s clear from these examples that Participatory Budgeting isn’t just for city councils – it can be used wherever you are trying to determine the best fit for community money.  The applications are limited only to your imagination, and there are practical uses for Participatory Budgeting in healthcare, parks and recreation, transit, emergency services, land use planning, technology – just about anywhere, really.

What is your take on the uptake of participatory budgeting in North America?