Home | Blog | social media | Why I worry about Twitter 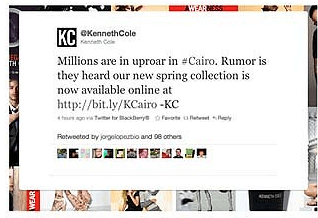 Like many others I was pretty perplexed by the shameless attempt by Kenneth Cole to promote his shoes using the #Cairo hashtag on Twitter.

I thought it ill judged and crass. But the reaction was also a touch disproportionate and perhaps played into the offenders hands. There were so many tweets, he gained so many followers and this shoe designer (who I had never heard of, though shoes aren’t really my thing) was propelled to the status of household name.

PR disaster or PR triumph?? Hard to tell, but I can guarantee that even if this wasn’t deliberate there will be others who will seek to promote themselves in this way.

There are 2 potential outcomes I am worried about here.

The first, a deluge of attention seeking ‘gaffes’ would be annoying and would bring Twitter into some disrepute as the mainstream media feasts on each in turn but would not really damage the community that many of us value so much.

The second concerns me more. One of the things I always tell clients about the potential of Twitter as a community engagement tool is that to get full potential from it you need to be real, it works best when real people engage in the conversation. This requires a little risk taking. It needs you to be able to be unscripted and spontaneous but that’s ok because when you do this the community responds positively and that link to the community is incredibly valuable to both community and organisation.

I’m worried we might lose this authenticity. I am concerned that as each apparent gaffe on Twitter gets blanket media coverage (surely there is something more important to report!) more and more organisations be they corporate, government or NGO will accept the wisdom that this is a dangerous tool in the wrong hands. And so Twitter will become the domain of the spin doctors, we will see carefully crafted content, less engagement and much less authenticity. Twitter will be manipulated in the same way that the mainstream media has been for years.

Certainly we are seeing lots of PR organisations stepping into the gap with slightly sanctimonious tweets aimed at promoting their businesses by condemning Kenneth Cole (I will not quote any of these because it would seem unfair to pick on any one agency or individual but if you look you will find them).

Perhaps this is inevitable, but I hope not.

Can we protect ourselves against this as a community? I think so. Perhaps the consequences (or rewards) of inappropriate behavior or crassness on Twitter should be less magnified. If we shun the idiots instead of amplifying them then they might just go away and take with them the fear mongers who see social media as another thing they can control and manipulate.

So when someone behaves like an idiot aka Kenneth Cole I suggest that instead of playing into their hands and reacting by retweeting them or sending them an open reply, instead DM them your disapproval and unfollow them (also block them from following you). That ought to do it.